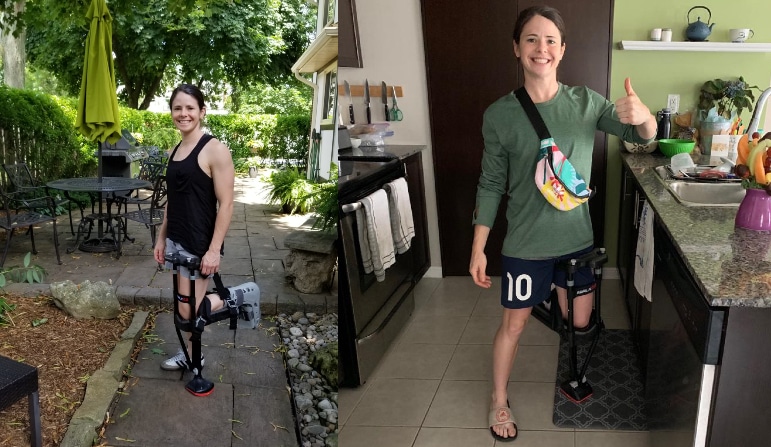 Posted at 02:44h in Stories by Natasha Boydell
0 Likes
Share

Soccer star Diana Matheson talks about her disappointment at missing the World Cup after a foot injury, her dread of crutches and how a hi-tech peg leg is helping her recovery…

When Canadian midfielder Diana Matheson was told she needed surgery on her foot, her dream of competing in the FIFA Women’s World Cup was shattered. For three months the two-time Olympic medallist had tried everything non-surgical to repair the damage, which started with an old fracture and led to a piece of bone becoming detached. Finally, in May, she was forced to accept that the only option was foot surgery.

Diana, who has played at four World Cups and three Olympics, says: “I was very upset because it meant I was definitely going to miss the tournament. Up until then I’d had high hopes that I was going to make it. I’d been trying to get back to playing but every time I tried to ramp up the training the pain came back. It was really hard to stay at home while my teammates went off to play in such a major tournament without me.”

Stuck at home with crutches

With just days to go before her teammates departed for France, Diana went in for surgery. Having broken both feet before, she knew what was coming – weeks of non-weightbearing and inconvenient and painful crutches.

She says: “I’ve spent a decent amount of time on crutches in the past and it’s always terrible, so I really wasn’t looking forward to it. You can’t walk, you can’t cook, you can’t carry things. It’s hard to get anything done. It gets really frustrating having no freedom at all.”

But after bumping into her friend, double Olympic gold medal winning gymnast Rosie MacLennan, Diana found a better option. Rosie told her about a crutch alternative called an iWALK2.0, which functions like a peg leg and gives users their mobility – and freedom – back.

Earlier this year, trampolinist Rosie sustained an ankle fracture when she landed awkwardly at the World Cup in Minsk. With just a year to go until the 2020 Olympics, Rosie was determined to get back to training as soon as possible so that she could qualify for her fourth games.

Rosie says: “I do a lot of core work and pilates in my training and the iWALK2.0 was really useful in getting me to, from and around the gym. I had to alter my workouts and be a bit inventive, but it kept me focused and helped me to recover. The device has a lot of benefits.

‘The iWALK2.0 gave me a better quality of life’

Diana explains: “Rosie was wearing this device and it looked really unusual, I’d never seen anything like it. I asked her about it and she explained that she was using it to stay mobile while recovering from an ankle fracture. She recommended I get one too and it was a lifesaver. I could cook, do laundry, clean up after myself.

Diana adds: “You can’t even make a cup of tea on crutches. So the simple task of making a drink, carrying it back to the table and drinking it was a joy. Just being able to walk and carry things was a huge game changer. It gave me a better quality of life for sure. It also meant I could workout at the gym easier and maintain my fitness ready for getting back on the pitch. I got tonnes of comments from people when I was wearing it.”

Diana, who has more than 200 caps with the Canadian national team, is hoping to be back at training by the end of the summer. She now has her eye firmly focused on the 2020 Olympics. She says: “I’m reaching the end of my career but I really want to get healthy again and stick around for one more year. I’m definitely aiming to be at Tokyo next year.”

Brad Hunter, President of iWALKFree, says: “The iWALK2.0 has given hundreds of thousands of people around the world their freedom back. We love hearing about how it’s helping athletes to recover after injury and get back to doing what they love. We wish Diana and Rosie a speedy recovery and look forward to seeing them both competing again and hopefully preparing for Tokyo next year.”