“I had high expectations, and I can honestly say that the iWALK2.0 delivered on all of them.”

Note – the video of Vic training was taken on his first day using the iWALK2.0.  Even we are impressed! 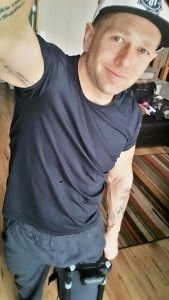 I was on crutches for four days after my Achilles surgery.  Crutches are brutal.  You have
no hands.  Stairs are downright dangerous – do it wrong and you’re going down.  For anything else, well, you just can’t do anything. Before crutches, I had use of two hands and two legs.  On crutches, I had us of one foot.  That means I’d lost 75% of my limbs, and it was brutal.  Everything was difficult – so I resorted to hopping around on one foot just to get by.

As an athlete, I hate being inactive, so I immediately looked for a solution. I did some research and found a video of a guy with a ruptured Achilles (like me) playing badminton on an iWALK crutch.  I ordered mine immediately.

After seeing the video, I had high expectations, and I can honestly say that the iWALK2.0 delivered on all of them.  On my first day, I went back to the gym on the iWALK2.0 and resumed my Muay Thai training.  I was back in action immediately thanks to the iWALK2.0.

The iWALK2.0 was like having a new leg.  It’s worth every penny.  You can’t compare it to normal crutches – you just can’t.  You can’t live your life the same way using crutches.  With iWALK2.0 you can. You don’t even think about your injury at all.

Take our quick online test to find out if iWALK2.0 will work for you: