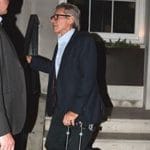 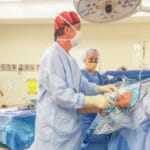 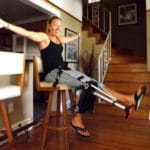 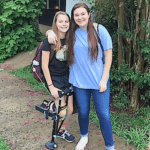 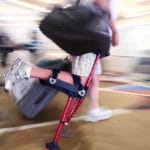 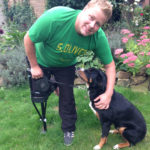 Just because you’re famous doesn’t mean you won’t get injured.  But it does mean that you’re likely to receive the best medical care available.  The pain and limitations of living with crutches is the same no matter who you are.  That’s why more and more VIP’s are choosing the IWALK crutch for their recovery.   Here’s a short list of our more famous customers.

A malfunction of the door of the Millennium Falcon while filming Star Wars 7, The Force Awakens resulted in it crashing down on Ford’s leg, badly breaking it. He found out about the iWALK2.0 and had to have it. Because he was in London at the time, we fitted him over the phone. He was walking within the first five minutes, impressive as he was 72 at the time.

A lesser known fact was that Ford used the iWALK for a second time a few months later when he was forced to crash land his plane on a golf course. While still restricted to a hospital bed, Ford insisted that the iWALK2.0 be approved by his surgeons for his recovery.

Kelly Slater is touted as the greatest professional surfer of all time, and his achievements back this up. Kelly suffered a severe Jones fracture while surfing in South Africa, and learned that he would need to be non-weight bearing for up to six months. Not a person that likes to be idle, Slater found out about the iWALK2.0 and got on board. Said Slater, “Many thanks to the crew at iWALKFree for my new walking crutch. So easy to get around now”. 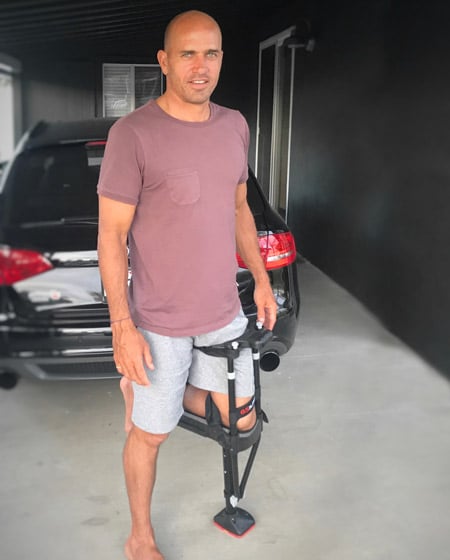 Katherine Legge is a professional race car driver who has competed in the Indianapolis 500, IMSA, LMP2, IndyCar, DTM, Formula E, SportsCar, and others. She crashed heavily during practice for the European Le Mans series and broke her ankle. Katherine used the iWALK3.0 to speed her recovery and had this to say:
“This device helped get me back on my feet (literally – and yes pun intended 😉
I’m not the most patient patient, and this got me up and about faster which I loved!”

January 7, 2020 – Jake Byrd (aka Tony Barbieri) is regularly featured on Jimmy Kimmel Live where he trolls various events to create hilarious segments. He was scheduled to attend the Flat Earth Convention but had a lower leg injury that made him non-weight bearing. Crutches or a knee scooter would have significantly affected his ability to perform, so the answer was the iWALK2.0. Watch Jake expertly navigate and troll the convention. 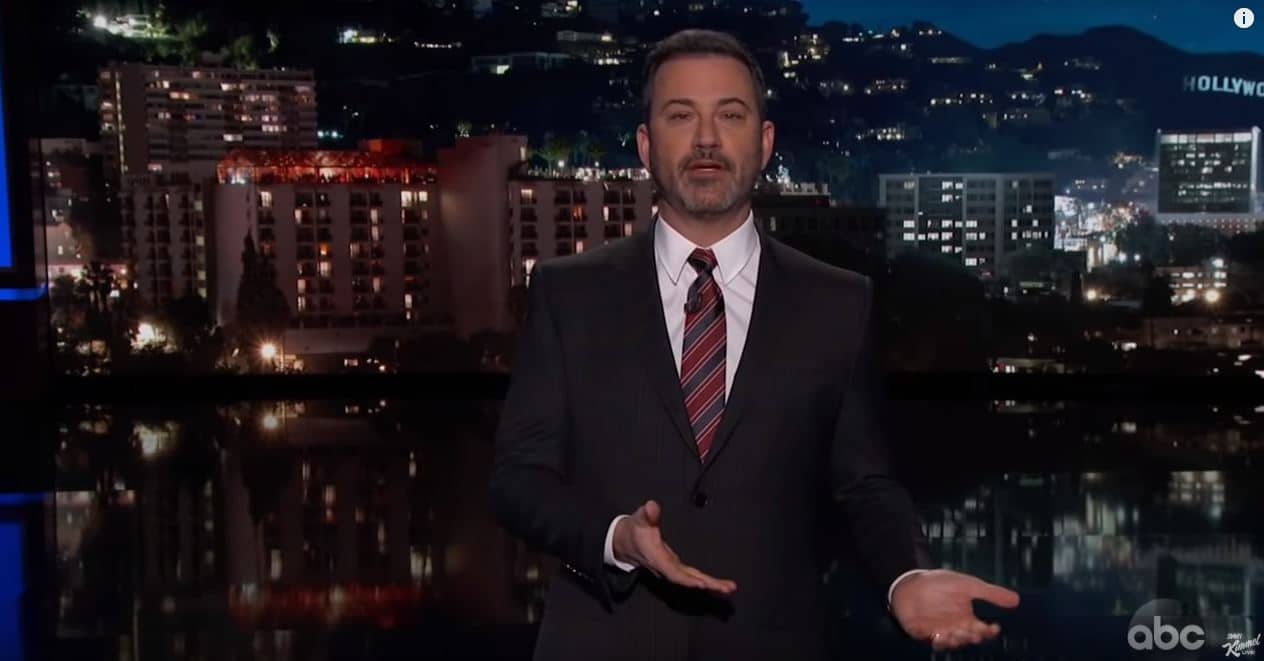 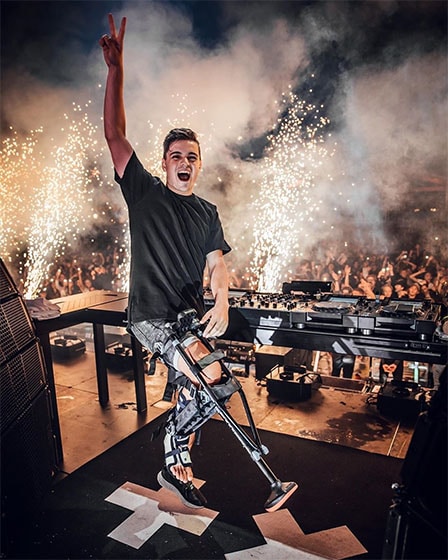 Martin Garrix consistently ranks as one of, if not the top ranked DJs in the world. While performing on the Las Vegas stop of his world tour, he jumped from the stage and suffered a serious ankle injury which required a long period of non-weight bearing rehab. Martin is well known for his animated stage presence, and performing on crutches was not an option – the world tour was cancelled. But then a few weeks later, the tour was back on. Martin discovered the iWALK2.0 and found that it enabled him to perform on stage, thus salvaging the tour.

Sloane Stephens is a nationally ranked tennis player (youngest ever to rank in the top 100) who had to withdraw from the 2016 US Open due to a foot injury. This resulted in her taking nearly a year off to recover. She entered the 2017 US Open the following year, and despite little time on the court to prepare, wound out defeating Venus Williams in the semi-finals and going on to win the US Open title. iWALK2.0 was used during her recovery, and we’re proud to have played a part in such a remarkable comeback. . 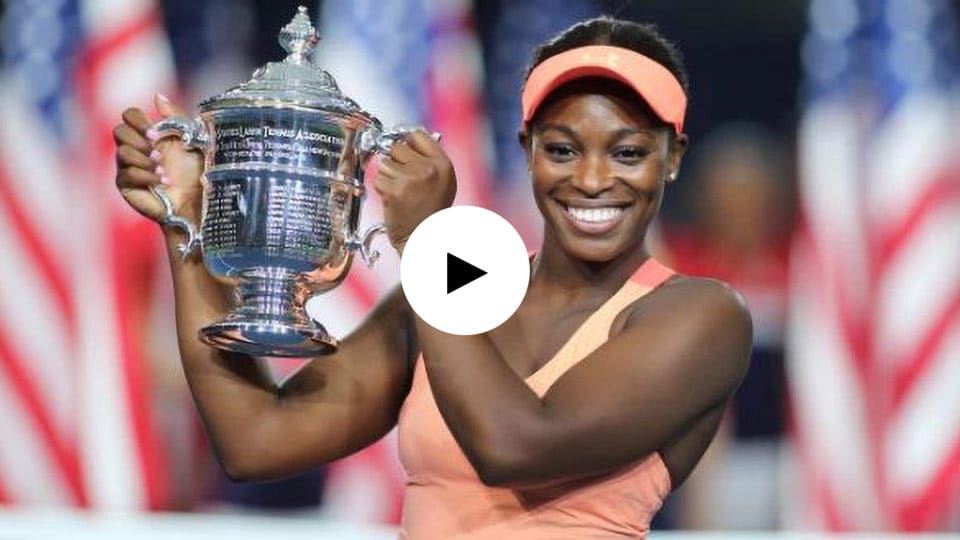 Nick Bonino will be remembered for his gritty performance in game 2 of the 2017 Stanley Cup finals. Bonino blocked a shot with his leg and suffered a broken tibia. Despite his injury, he continued to play and finished the game. The Penguins went on to win the Stanley Cup, and the team was invited to pitch the first ball in a Pittsburgh Pirates game. The entire team took to the field, including Bonino, which was made possible because he was using the iWALK2.0 for his recovery.

I could work out before I could walk! 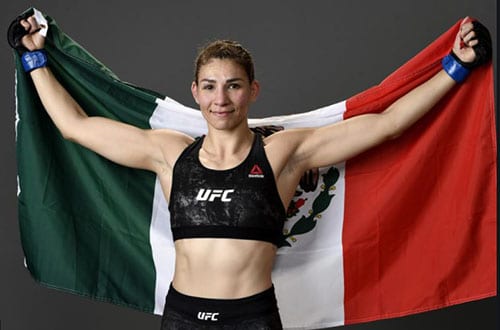 Multiple WWE champion Xavier Woods ruptured his Achilles during a match in Sydney, Australia with fellow New Day member Big E. Anxious to get back in the game, Woods chose the iWALK2.0 to speed his recovery and remain hands free during his recovery. He even made a video to show his fans his first time using the iWALK – view it here.

Tyron famously broke his foot during UFC 183 where he defeated Kelvin Gastelum even though he broke his foot during the bout. To be ready for his next fight, Tryon needed to continue training immediately, so he got the iWALK2.0. As a result, he was able to continue his training and recovered three weeks faster than scheduled. The rest is history – in his next bout, he became the UFC World Champion. 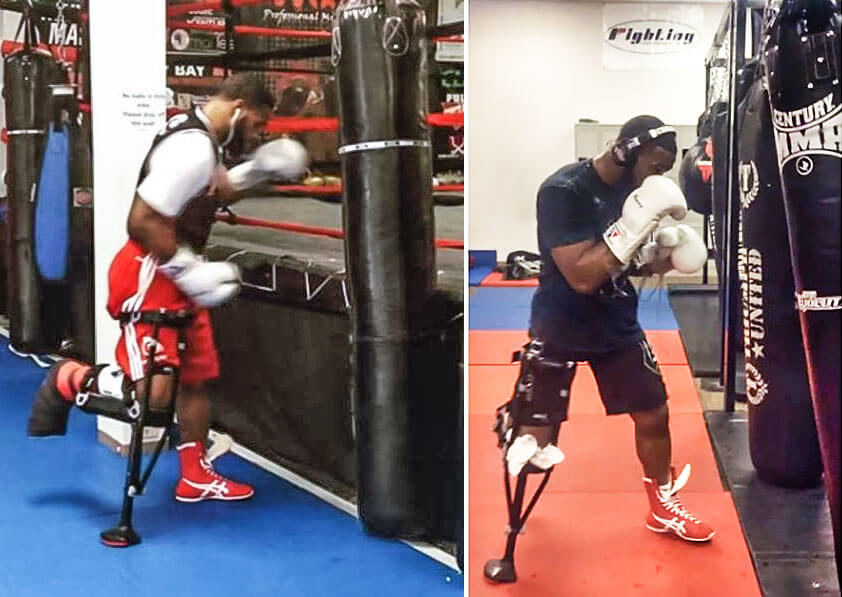 “I can totally do this! I’m walking! Omigod – this is great!”

Anyone who has been around Mario Lopez knows that he is a bundle of energy. Mario is always on the move, and always with a big smile. A little known fact is that Mario loves boxing and participates regularly. While sparring in the gym, Mario ruptured his Achilles tendon. Life was about to be put on hold, including his busy schedule hosting Extra TV, which typically requires him to stand while filming.
Then Mario found out about the iWALK2.0 and that changed everything. In his first minute on the iWALK, the realization hit him, “I’m walking! And it doesn’t hurt! This is awesome! Omigod – I feel like I’m a real person again! I’ll be able to do the show again – I can totally do this!

Mario was able to resume shooting immediately. Shots were restricted to above the waist, so for several weeks the iWALK was the unsung hero that made Extra TV’s beloved host continue to be seen by his millions of fans.

Real Housewives of Orange County alumni Tamra Judge broke her foot after a boozy night out in Mexico. The accident was later aired on the show. Tamra had to keep the weight off her foot so that it could heal but she still needed to get around, so she used the iWALK2.0 to help her stay mobile. She even made a video of her “new leg” – see it here. 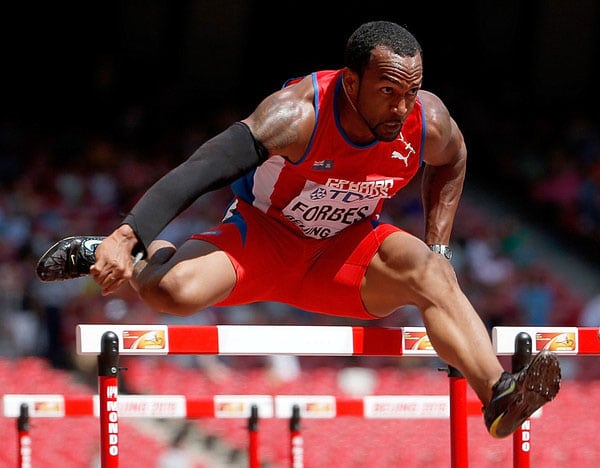 Ronald Forbes is a world class hurdler who had qualified to compete in the Rio de Janeiro Olympics. With only fourteen weeks remaining before the games, he suffered a major tear (85%) of his Soleus muscle. His doctors told him he would be on crutches for 12 weeks, which meant that his Olympic dream was impossible. He chose to use the iWALK2.0 instead and recovered in time to compete in the Olympics.

Romeo Pellum suffered a spiral fracture of the fibula and found himself on crutches. Eager to get back to his training, he needed a better alternative than crutches or a knee scooter. He got the iWALK2.0 and was walking in seconds. 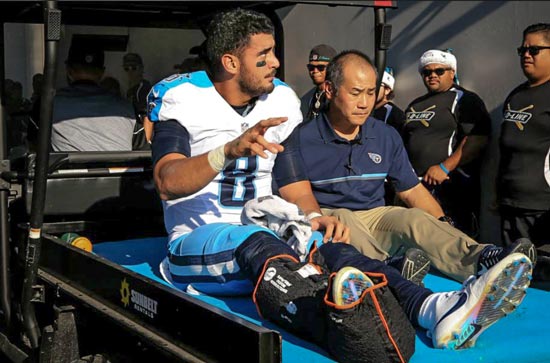 Mariota famously broke his right fibula during an NFL game, ending his season as quarterback for the Tennessee Titans. He did the majority of his recovery in Oregon, where he was seen around town using his iWALK2.0 crutch.

When serving as the defensive line coach of the LA Rams, Mike Waufle suffered a lower leg injury. While working at the NFL combine he found that he couldn’t perform his on-field duties while using crutches or a knee scooter, so he had to delegate the job to an assistant. Then he found out about the iWALK2.0, practiced for one evening, and was back on the field the next day. 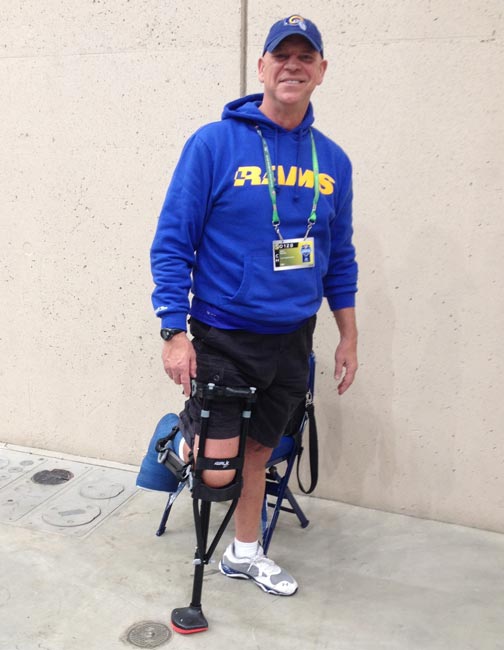 Other teams that have the iWALK2.0 in their training rooms: 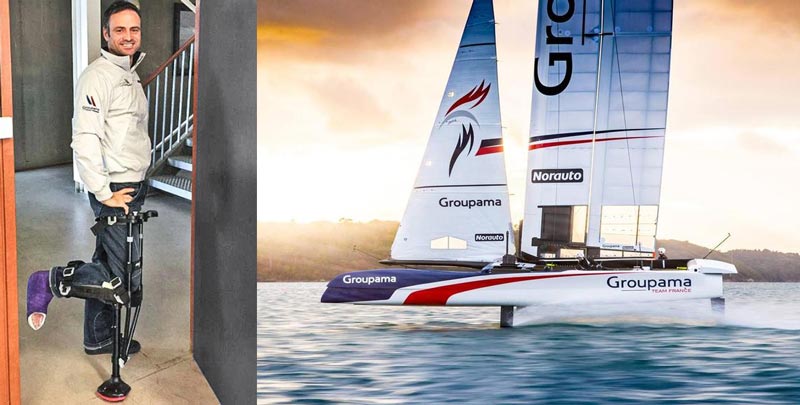 The America’s Cup foiling catamarans are capable of speeds in excess of 50 mph. During practice, Frank Cammas, skipper of France’s entry in the 35th America’s Cup, was thrown overboard. The rudder hit his leg and nearly cut if off. Cammas used the iWALK2.0 to recover from this horrific injury.

When Rob Van Dam broke his foot, he quickly found out that even for a conditioned athlete, crutches s**k (his words). Then he found out about the iWALK2.0 and immediately regained his functional lifestyle. Rob loved his iWALK2.0 so much he even made a video to share with the world – you can see it below. 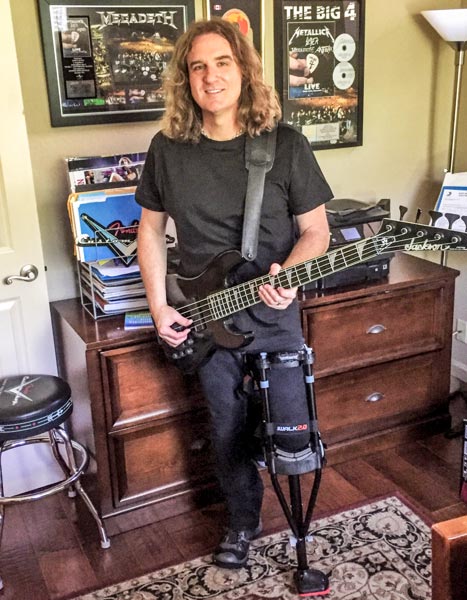 What happens when you’re a rock star, with a concert tour scheduled, and you break your foot? If you’re like Dave Ellefson of Mega Death, you don’t stop performing, you get an iWALK2.0 and rock on!

Levi Leipheimer, now retired, was considered the best cyclist in the USA. His accomplishments include Olympic medals, stage wins and podium placements in the Tour de France and multiple grand tour overall victories. He suffered a major break to his lower tibia and fibula. Anxious to get back on the bike, Leipheimer used the iWALK2.0 for his recovery. 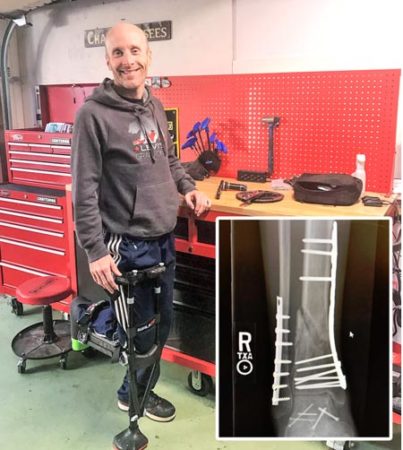 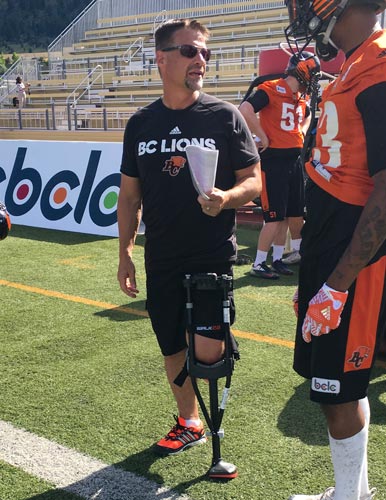 A successful professional football coach and recently published author, Marcel Bellefeuille, re-ruptured his Achilles tendon. He wanted nothing to do with crutches for his six weeks non-weight bearing recovery so he went to the best alternative available, the iWALK2.0.

“Yesterday was my Achilles surgery, today I’m back on the practice field. Thanks to my friends at iWALKFree and BC Medequip who same day couriered a unit out to our training facility. Great product and customer service”

Rosie MacLennan is one of the most successful Olympic athletes in Canadian history. She is dominant in the sport of trampoline, with two Olympic gold medals (London 2012 and Rio 2016), two world championships, and three national championships. While recently competing at the World Cup in Belarus, she crashed and broke her ankle. With the qualifiers for the Tokyo games looming, Rosie needed to recover quickly, and like so many other champions, used iWALK2.0 in her recovery.

“Life on crutches was really restrictive – there are a lot of things you can’t do. I couldn’t carry anything, even grocery shopping was quite challenging. Before iWALK, I couldn’t do the day to day things I need to in order to maintain my nutrition for recovery. And it’s been very useful for getting back in the gym. I’m really appreciative – iWALK makes a huge difference. I’ve already recommended it to a member of the Canadian national soccer team who has a foot injury.” 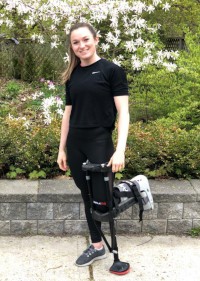 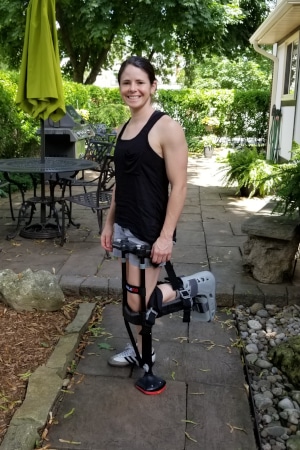 When Diana was told she needed surgery to repair bone and ligament damage to her foot, her dream of competing in the 2019 FIFA Women’s World Cup was shattered. Having broken both her feet before, she knew what was coming – weeks of non-weight bearing and having to survive on crutches. She says: “You can’t walk, you can’t cook, you can’t carry things, it’s hard to get anything done. It gets really frustrating having no freedom at all.”

But after bumping into her friend, Rosie MacLennan (see above), Diana found a better option – the iWALK2.0. Diana says: “It was a lifesaver. I could cook, do laundry, clean up. It also meant I could workout at the gym easier and maintain my fitness ready for getting back on the pitch. It gave me a better quality of life.” 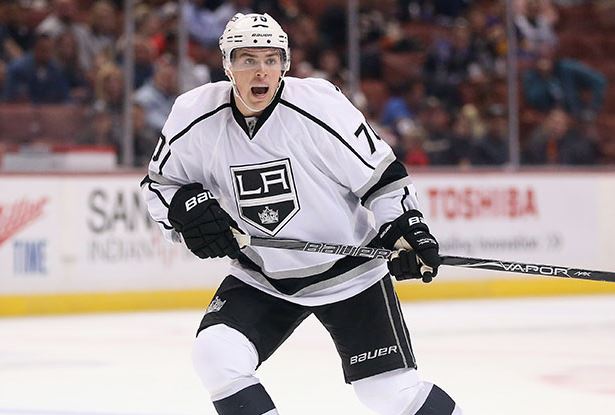 We love getting testimonials from our customers and often share them on our website, social media and other communications. Help us show others what the iWALK can do for them!

In order to be published, testimonials must include a photo or video showing someone wearing or using their iWALK crutch.

If your file is too large to upload here, we suggest using wetransfer.com for video or large images. Send your Word files to marketing@iwalk-free.com, or call us at 562 653-4222 for instructions.