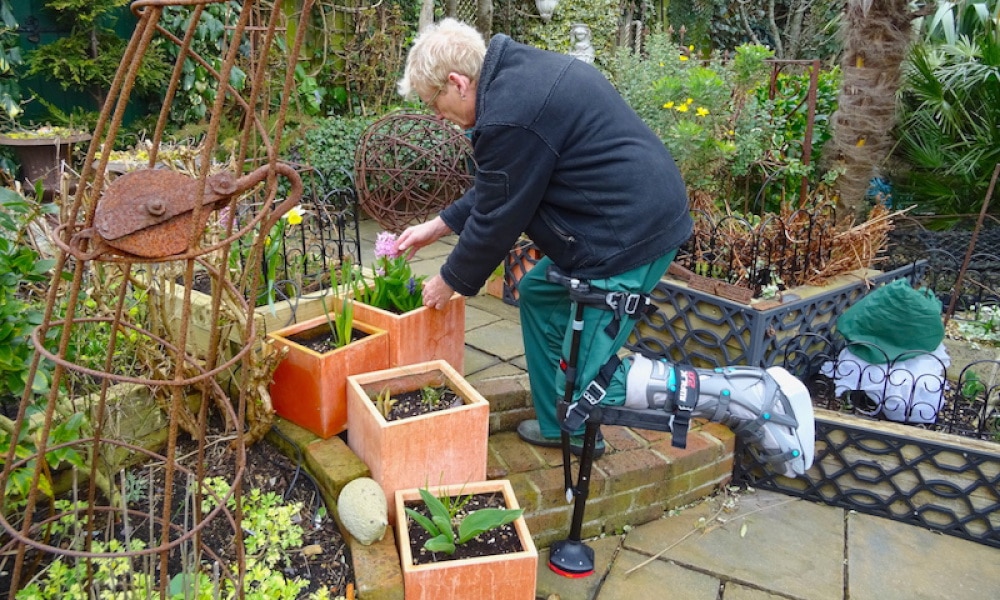 10 Mar ‘Hands-free crutch is a valuable tool for gardeners’

Posted at 02:34h in Stories by Natasha Boydell
0 Likes
Share

Spring is the busiest time for Geoff Stonebanks, gardening columnist, as he prepares to open his award-winning garden to the public, so he was devastated when he tore his Achilles tendon and was unable to walk. But a hands-free crutch has enabled him to get back out into the garden and has now become an essential addition to his tool bag…

With just weeks to go before Geoff Stonebanks opened his garden to the public, he had a pretty long to do list and couldn’t wait to get started. So, when he missed a step and fell, tearing his Achilles tendon, the timing couldn’t have been worse.

At hospital he was given a pair of crutches and told that he wouldn’t be able to put any weight on his leg for up to four weeks. He soon discovered that not only were crutches difficult to use in the house, they were utterly impossible to use in his beloved garden, which he has spent years nurturing.

Geoff owns Driftwood Garden, a coastal garden in the UK county of East Sussex, which has become a popular destination for locals and tourists. He usually works on the garden all day every day in the spring as he prepares to open it to visitors.

He says: “To someone who has created a multi award-winning garden that’s raised more than $170,000 for charity, the prospect of being on crutches at a really critical time of the gardening year was daunting. So, after being told I would need to be non-weight bearing for several weeks, I thought my world had fallen apart. Having a pair of crutches in my hands in the house alone was unthinkable, never mind being able to do anything in the garden. My office is on the ﬁrst ﬂoor too, so negotiating stairs was imperative.”

Geoff’s partner did some research online and found the iWALK2.0 hands-free crutch. At first Geoff was unsure whether it was worth the money and if the device would work for him, but he was so frustrated with crutches that he decided to give it a go.

He explains: “Given my level of incapacity and the knowledge of everything I wanted to achieve, I thought sod it! I have never been one to sit on my laurels in good health, never mind bad. I made an instant decision to purchase one.”

The hands-free crutch arrived the next day and after watching some YouTube videos Geoff was quickly walking around the house and up the stairs to his office. The next challenge was the garden and although he had to gain confidence on the uneven terrain, he was soon back to work, carrying out essential tasks like weeding and potting.

He says: “I’ve now had the iWALK2.0 for over a week and my conﬁdence has grown immensely, so much so that I have been able to move fairly easily around the garden. That is a challenge in itself, as it’s on an uphill slope and has many levels and steps.

“The device has three easy to remove and ﬁx straps that allow for kneeling down in one point for a while. My ability to move around the garden and complete basic things like potting up in the greenhouse or weeding and deadheading raised beds are still easily managed. This would not have been at all possible without this amazing piece of kit.”

Geoff adds: “For people with lower leg injuries who work or spend a lot of time outdoors, like gardeners, it is a really good addition to the toolkit. So, if you are mulling over acquiring one, for my money it’s worth every penny!”