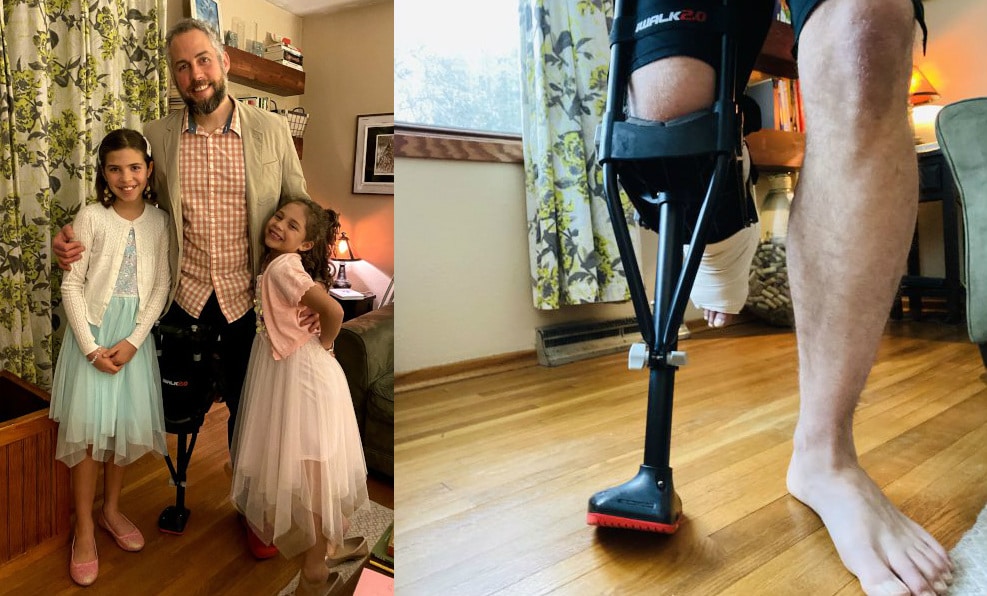 Posted at 06:28h in Stories by Natasha Boydell
0 Likes
Share

Cory Cripe was heartbroken that he might have to sit out the annual Valentine’s dance, which he has taken part in for the last six years. The highly anticipated event brings all the local schools together and is much-loved by the children in Holmen, Wisconsin.

Dad-of-three Cory had been looking forward to hitting the dancefloor again this year with his daughters Sophia, 12, and Ruth, 6, when an accident left him needing surgery and facing weeks off his feet. Determined not to let them down, he borrowed a hands-free crutch called an iWALK2.0 and was able to keep the tradition going.

Cory, 40, says: “The other dads told me that I had the best excuse not to take part but I wanted to keep my promise to the girls. They had assumed I wouldn’t be able to go this year but thanks to the iWALK2.0 I was able to take part and hang out with my kids. I probably danced better than I would with two normal feet.”

Cory’s accident happened in January during a visit to his mom’s house. He was going downstairs in the middle of the night when he spotted the cat lying on the landing. As he tried to step over it, Cory lost his footing and fell down the stairs.

He broke two bones at the ankle joint – the fibula and tibia – but didn’t realise the extent of the damage and went back upstairs to bed. Over the next few days Cory, who owns a gym, walked, drove, and even coached clients. Three days after the accident, he finally went to the urgent care centre and was shocked when he was diagnosed. Cory needed surgery, where a metal plate and pins were inserted to hold his bones in place and was told that he wouldn’t be able to put any weight on his leg for six to eight weeks.

He says: “I had crutches at first and it was a nightmare. Simple, everyday things like making lunch for the kids or getting ready for work felt impossible. I couldn’t even carry my coffee to the living room to enjoy it. I still had to go the gym and coach but I couldn’t do anything. I was in the room but that was pretty much it.”

Cory adds: “My hands were hurting from how much I was gripping the crutches and they were starting to leave marks from where they were rubbing against my ribs. The only good thing about them was that they got me out of doing the dishes.”

One of Cory’s clients, who broke her foot last year, introduced him to the iWALK2.0, and it was a gamechanger. He says: “Suddenly I had my independence back. I could use my hands which meant I could do everyday tasks again. I could walk up and down the stairs to say goodnight to the children – with crutches I had to crawl.”

Cory adds: “I can do my job again too. On crutches I would just hobble around and tell people what to do. Now I can walk and bend over, pick things up, get equipment ready for my clients. Exercise-wise I can do a whole lot more too.”

The hands-free crutch has also made Cory feel more stable and secure while walking on snow and ice, so he’s been able to get out and about. He says: “I can get in and out of the car easily and my wife and I were able to go out on a date. She’s very happy I have the iWALK! It has not only helped me physically, it’s also made me feel much more positive. Being able to take part in traditions like the father daughter dance and still spend quality time with the kids has been a big benefit.”

The iWALK2.0 is an award-winning, FDA / CE registered medical device which functions like a temporary lower leg and allows people to walk around unaided, with full use of their hands and arms. A 2019 medical study found that nine out of ten patients prefer it to conventional crutches. It can be used by the majority of people with lower leg injuries.

Brad Hunter, President of iWALKFree, Inc, says: “We’re delighted to hear that the iWALK2.0 has enabled Cory to take part in the father daughter dance and to keep up this longstanding tradition despite his injury As Cory discovered, being able to keep active and stay involved in social activities can have a huge impact on your physical and mental wellbeing while recovering from a lower leg injury.”

Brad adds: “For many people, losing their independence after an injury is the hardest part of recovery. Mobility is essential, and when we lose it, it affects our body and our mind. With crutches you’re disabled but with the iWALK2.0 you’re enabled, giving you freedom to maintain a normal lifestyle during the non-weightbearing period.”