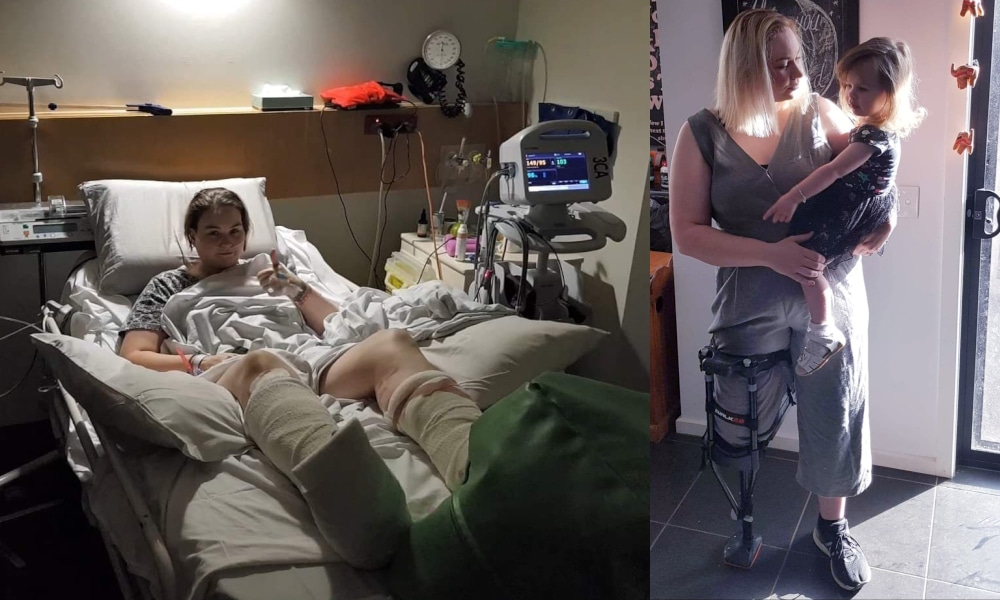 Posted at 05:12h in Stories by Natasha Boydell
0 Likes
Share

Erin Rose, 27, was driving home with her one-year-old daughter when she was in a horrific head on collision. She was left with life-changing injuries and has endured five surgeries in the months since the accident. But thanks to a hi-tech ‘pirate-leg’, she says she has finally got her independence back and can chase after her toddler again…

She’d just celebrated her daughter Poppy’s first birthday when Erin’s life was turned upside down in a split second. While driving home after taking the family dog, Patch, to the vet, Erin was hit head on by another car travelling on the wrong side of the road. Both cars were doing around 70kmph and there was no time to brake. The impact was devastating.

“The front of the car was completely crushed, as were my legs,” Erin, from Victoria, Australia, says, “I was pinned in the car for 1.5 hours and it was the scariest time of my life. I thought I was going to die.”

Poppy was in the back of the car at the time but miraculously didn’t have a scratch on her, something her mum credits the toddler’s rear-facing car seat for. For Erin, however, the situation was very different, and she was left with multiple injuries – including a head injury, two broken ankles and a fractured knee.

Erin is a nurse and knew how severe her injuries were and the long road to recovery that lay ahead. She says: “I spent the next month in hospital and the following three months in a wheelchair. I had to learn to walk again, I had five surgeries in 10 months and many complications. My recovery was very slow and there were times when it felt like I’d never reach the light at the end of the tunnel. It was incredibly hard to stay positive.”

Ten months after her accident Erin’s right ankle still hadn’t healed properly and she had to prepare herself for yet another surgery – this time ankle fusion, which is where the bones are permanently fused together at the ankle joint so that it can’t bend.

Erin says: “After the surgery I couldn’t use crutches. I had developed a condition called bursitis in my shoulder after months of using a crutch, which is when the joint becomes swollen, tender and sore, and it was too painful to use my arm at all.”

Erin adds: “I had felt useless since my accident, like I was a burden. Everyone had to help out to take care of Poppy. When my husband went back to work, I couldn’t look after her myself, so my mum and dad took it in turns to stay with me. By the time I had my ankle fusion, it had been nearly a year since the accident and I was still unable to walk unaided or chase after Poppy, who was a typical energetic toddler.”

Erin was watching YouTube when she came across a hands-free crutch called the iWALK2.0. The award-winning crutch alternative functions like a hi-tech pirate-leg and allows people with lower leg injuries to walk around unaided, with full use of their hands and arms. Meanwhile their injured leg is kept elevated, safely strapped to a padded platform.

Erin says: “I refused to go back into a wheelchair, so I decided to order one. As soon as the iWALK2.0 arrived, it changed my life. It was absolutely amazing. It allowed me to do some housework, get around my back yard, do chores and just get on with my life – things that I was unable to do on crutches. Most importantly, I was able to look after Poppy again – I could chase after her, play with her and even pick her up and cuddle her. I felt useful for the first time in many months. Once you get used to the iWALK2.0, it’s no different to walking on your own two legs.” Erin adds: “Every time I went out shopping with the hands-free crutch on, so many people came up to me to ask about it. It really changed my recovery.”

It’s now approaching one year since the accident, which happened on 19 February 2019. Erin says: “I’m now partially weight-bearing again although I still use my hands-free crutch when I’m having a bad day or if I need to get somewhere quickly – and with an almost two-year-old that’s pretty often as you can imagine!”

The iWALK2.0 is an award-winning, FDA / CE registered medical device which can be used by the majority of people with lower leg injuries. A 2019 medical study found that nine out of ten patients prefer it to conventional crutches.

Brad Hunter, President of iWALKFree, Inc, says: “We’re delighted to hear that the iWALK2.0 helped Erin in her recovery and gave her some much needed mobility and freedom back. We’re certain that Poppy is even more delighted to have her mum chasing after her again!”

Brad adds: “For many people, losing their independence after an injury is the hardest part of recovery. Mobility is essential, and when we lose it, it affects our body and our mind. With crutches you’re disabled but with the iWALK2.0 you’re enabled, giving you freedom to maintain a normal lifestyle during the non-weightbearing period.” 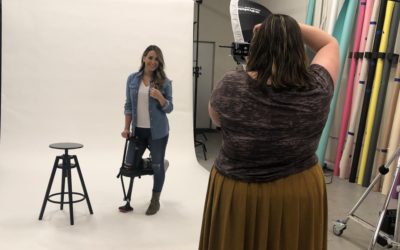 ‘I Cried Every Day When I First Broke My Ankle’

Celebrity spirit medium Monica Ten-Kate has revealed how she’s recovering from a nasty ankle injury with the help of a “life-changing” crutch alternative.

‘Hands-free crutch is a valuable tool for gardeners’

Geoff Stonebanks was devastated when he tore his Achilles tendon and was unable to walk but a hands-free crutch has enabled him to get back out into the garden and has now become an essential addition to his tool bag.