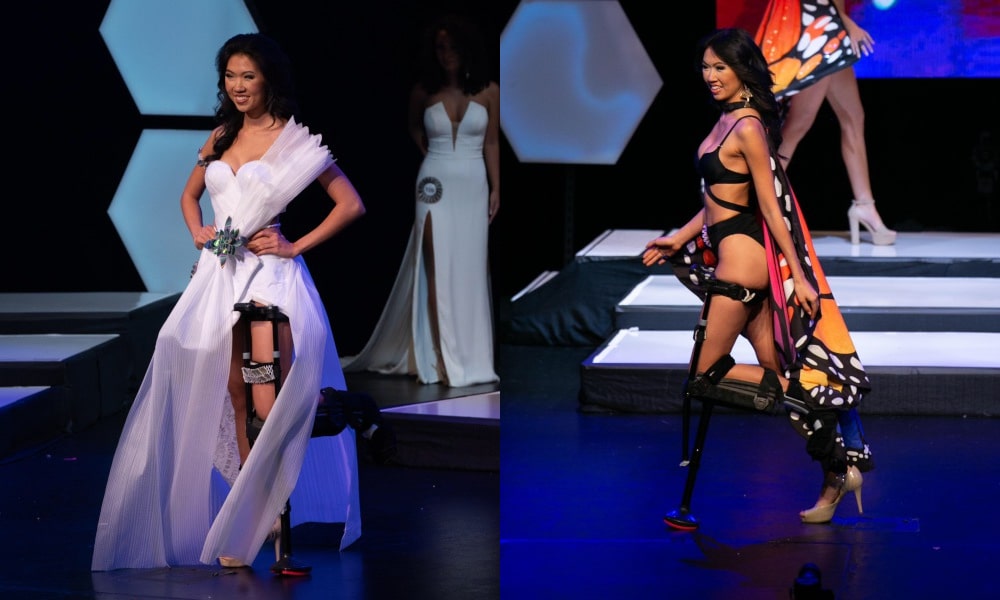 Posted at 06:17h in Stories by Natasha Boydell
0 Likes
Share

A Miss Florida USA contestant who damaged her ankle while training for the beauty pageant took to the stage anyway, with the help of a hands-free crutch.

Elizabeth Tran made the top 15 out of more than 80 contestants wearing the device and says the experience made her feel “unstoppable”.

Determined Elizabeth wouldn’t let anything stand in the way of her competing for her dream title after two years of preparing for the high-profile event. The Miss North Miami representative, who also wore an eco-gown made entirely out of discarded materials to promote sustainability, had been looking forward to it for months.

But just days before the event the 25-year-old feared she may have to admit defeat after an injury left her in agony and unable to move. The accident happened during a boot camp to prepare for the pageant.

Elizabeth explains: “I stepped on a mini hurdle and fell sideways, rolling my ankle over. It was very painful but I didn’t think it would be a big deal. By the time I got home I couldn’t walk and I had to crawl down the hallway to my apartment.”

Elizabeth’s friend lent her some crutches but she hated them. She says: “I had no idea how painful they were. Within a few days my hands were bleeding from using them and I had to wrap them with athletic tape. I thought ‘I can’t do this anymore’.”

Elizabeth went to see her doctor for X-rays and discovered that she had sprained her ankle and snapped two ligaments. She says: “The doctor told me it would take two to three weeks for my ankle to heal – the pageant was just one week away. I was in excruciating pain and just felt horrible. Miss Florida USA is the Super Bowl of pageantry but I couldn’t imagine doing it in this condition. I reached out to the pageant director and she suggested I get a hands-free crutch called an iWALK2.0.”

Elizabeth was sceptical at first but after watching videos of people using the device online she ordered one. It arrived on Friday, with just six days to go until the pageant. She says: “I practised like crazy to make sure that I could walk comfortably in high heels and pose wearing it. It was easy to adapt to and I was able to go back to the gym and do exercises that I wasn’t able to before. All of this helped me to prepare mentally and physically for the competition.”

Elizabeth has been competing in pageants since the age of eight and says they have played a huge role in her life, helping her to feel more confident and beautiful in herself. Her mom and sister also compete. This is the second time she has taken part in Miss Florida USA, which will see the winner compete in the nationally televised Miss USA. She also entered in 2018 but didn’t make the top 20. Elizabeth told herself that she would come back two years later with the right mindset and outlook.

She says: “It’s been two years of personal development and when all of this happened it was a test of my personal, mental, and emotional stamina. I feel so proud that I got through it and walked on that stage.”

It was also an opportunity for Elizabeth to promote sustainability, something that she has been passionate about since she was 12 years old. As a girl she passed by the Miami landfill known as Mount Trashmore and was shocked by the vast piles of waste. She decided to volunteer with environmental non-profit organizations but was told that she was too young, so she set up her own, Teens Go Green, to promote sustainability. The organization is now best known for its trash fashion and Elizabeth organises a number of eco-fashion shows across Florida, with one also due to be held in New York this year.

Elizabeth and her mom made the eco-dress that she wore for the pageant and she hopes this will raise awareness of environmental issues and the impact of disposable fashion on the planet. She says: “I wore a dress made of garbage and a pirate leg. If nothing else, I think people will remember me!”

Elizabeth adds: “I wouldn’t have been able to stand, literally or figuratively, on the stage had it not been for the iWALK2.0. It gives people hope at the most desperate of times.”

The iWALK2.0 is an award-winning, FDA / CE registered medical device which can be used by the majority of people with lower leg injuries. A 2019 medical study found that nine out of ten patients prefer it to conventional crutches.

Brad Hunter, President of iWALKFree, Inc, says: “We’re delighted to hear that the iWALK2.0 allowed Elizabeth to take to the stage at Miss Florida USA. Elizabeth represents what the device is all about – with crutches you’re disabled but with the iWALK2.0 you’re enabled and that means that anything is possible, even walking the catwalk in a beauty pageant.”