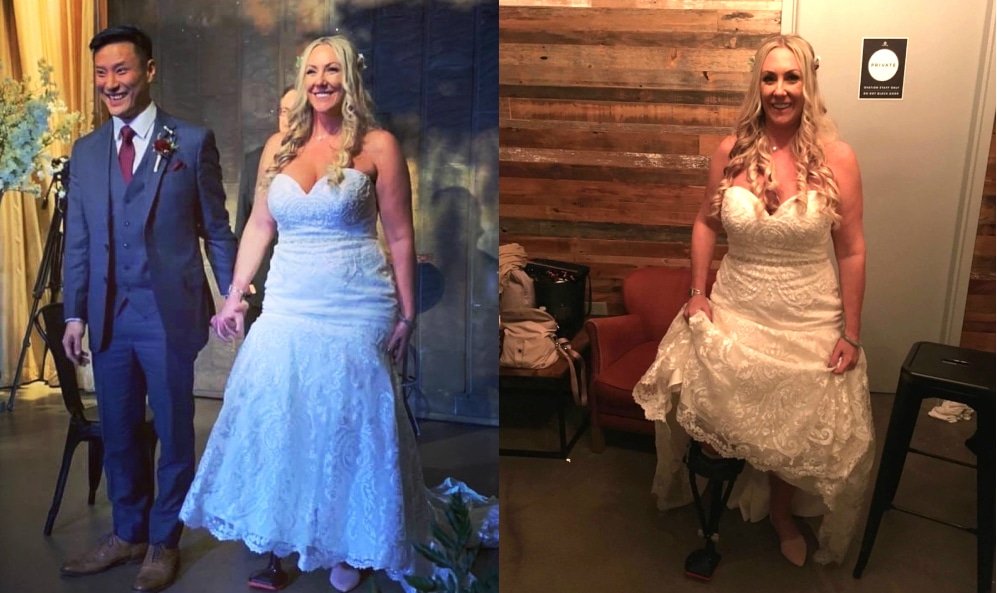 Posted at 02:26h in Stories by Natasha Boydell
0 Likes
Share

A bride who broke her ankle in three places just a week before her wedding day achieved her dream to walk down the aisle, by wearing a high-tech hands-free crutch.

Ashlie Vaughn, 38, even managed to enjoy the first dance with her new husband Li Feng, 39, by wearing the device, which she says saved her wedding from disaster.

“Every girl wants their wedding day to be perfect,” she says. “For me that meant walking down the aisle towards the man I’ve wanted to marry my whole life. I never thought I’d be able to do it with a broken ankle, but I’ve learned that anything is possible.”

Ashlie, from Chicago, IL, slipped when going down the stairs in her new home, where she had only been living for a month. She fell down three stairs and her ankle crashed into the wall. She says: “I felt shooting pains and cried out, and Li came running down the stairs to see what had happened. We went to a walk-in clinic and they sent me straight to a specialist.”

Scans confirmed that Ashlie’s ankle was broken in several places and that she would need to have surgery and wear a cast for weeks. She says: “I immediately started bawling. I had been planning my wedding forever, so being told that I’m not going to be able to walk was heart-breaking. Just eight days before my wedding I had to have a plate and three pins put in my ankle. All I could think about was how I was going to walk down the aisle. I did not want to be on crutches or in a wheelchair for one of the most important moments of my life.”

Ashlie went online and discovered the iWALK2.0, an innovative hands-free crutch which enables people with lower leg injuries to walk unaided. The FDA / CE registered device functions like a high-tech pirate leg and takes most people just half an hour or less of practice to adapt to.

Ashlie says: “I thought the iWALK2.0 would be a great option but it had a handle on it which I knew wouldn’t fit under my tight wedding dress. I contacted the company, iWALKFree, and they immediately offered to personally adapt it for me so that it would work. It arrived just three days later, giving me enough time to practise before my wedding day.”

Ashlie adds: “When I first tried it, I was nervous and Li had to hold on to me as I took my first steps but within 20-30 minutes I could walk on my own.”

On Ashlie’s big day, 8 November 2019, she walked down the aisle wearing her dream dress and a big smile on her face. She says: “You have this plan in your head of how you want your wedding day to be. You want it to be perfect and to me that meant walking down the aisle, so I was really happy that I was able to do that.”

Later, Ashlie and Li enjoyed their first dance, Never Enough from the film The Greatest Showman. She says: “Our guests were so happy that we were able to do our dance and that I was so positive throughout the day. I know that I wouldn’t have been so positive if I’d been unable to walk – that would have put me in a dreary, sad mood.”

The iWALK2.0 is an award-winning hands-free crutch which has been worn by hundreds of thousands of people around the world. First invented by a farmer who broke his foot but still needed to work, it is now a carefully engineered FDA registered Class 1 medical device. New research, published by the US medical journal Foot & Ankle International, found that nine out of ten patients prefer the iWALK2.0 to conventional crutches.

Brad Hunter, President of iWALKFree, Inc, says: “When Ashlie told us her predicament, we wanted to do whatever we could to help. We’re delighted that she was still able to have the wedding she had been dreaming of despite her injury. Ashlie’s experience epitomizes what the device represents – with crutches you’re disabled but with an iWALK2.0 you’re enabled and that means that anything is possible, even walking down the aisle!” 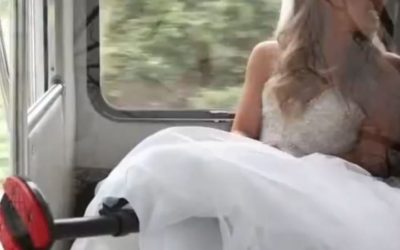 The iWALK2.0 helps injured brides get back on their feet and fulfill their dreams of walking down the aisle and dancing the night away in style. 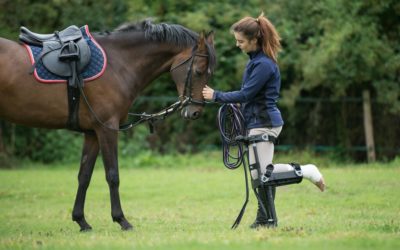 A broken ankle or ankle fracture is a common joint injury. If you or a loved one has suffered a broken ankle, you may be wondering why ankle fractures happen, how they can be treated, how long it takes to heal and much more.