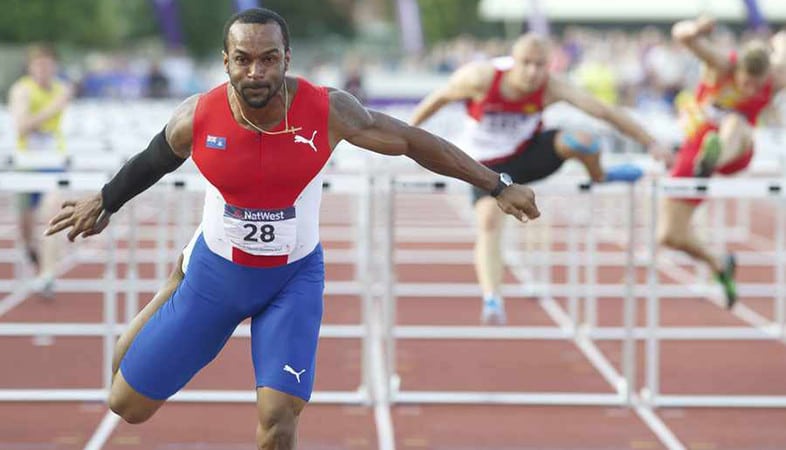 Posted at 11:12h in Stories by Brad Hunter
0 Likes
Share

Last summer Ronald Forbes was preparing to compete in the 110 meter hurdles in his third Olympic games when he was devastated with a torn calf muscle. Faced with the possibility of missing his run in Rio, Forbes knew that he would need nothing short of a miracle to get there. He threw away those crutches, strapped on the iWALK2.0, and reset his sight on the summer games! iWALK2.0 was that miracle and a key component to Ronald’s quick and miraculous recovery. Ronald Forbes made a video to document his ‘Road to Rio’ for the 2016 Olympics in Rio. Click the image above or here.

iWALK2.0 is Key to Olympian’s Recovery on His Road to 2016 Summer Games Ronald J. Forbes’ aspirations of becoming a 3-time Olympian almost came to an abrupt end. Ronald had already qualified for the summer Olympics in Rio in the 110-meter hurdles, but three months before the event, he suffered an 85% tear in the soleus muscle of his right calf. Faced with the prospect of being on crutches, suffering significant muscle atrophy, and halting his training, Forbes knew that he needed a quick fix!

The 31-year-old from the Cayman Islands was no stranger to the rigorous training needed to qualify and compete on the world stage. He’d previously competed in the summer Olympics in Beijing and London. He had also just set the national record for the 110 meter hurdles and was primed for a great performance in Rio, but recovering from this significant in only three months seemed impossible!

Ronald was given the typical recovery regimen for a torn soleus muscle – eight weeks of non-weight bearing activity on crutches or a knee scooter, which would severely limit his mobility. Knowing that muscle atrophy would set in immediately, at a rate of 1.5 to 2% per day, Forbes had to figure out a way to maintain has much strength as possible in the rest of his body. He also needed his soleus muscle to heal as fast as possible, so 100% compliance with the non-weight bearing prescription was mandatory. Crutches were simply not an option. They would drastically curtail his mobility. A knee scooter would give him better mobility, but he didn’t want to chance the muscle atrophy that would take place if he didn’t use his right leg at all.

Fortunately, Forbes remembered seeing an ad for the iWALK2.0 revolutionary hands-free crutch on the back cover of a magazine. He immediately ordered one, and was up and moving around in no time at all. “The transition to walking in the iWALK2.0 was easy. Within five minutes I got my balance and was able to move around normally,” Ronald remembers. He was back at the gym performing non-load bearing cardio and weight-lifting activities. The iWALK2.0 hands-free crutch was critical in Ronald’s recovery and continued training, giving him mobility and freedom and playing a pivotal role in his remarkable effort to compete in his third Olympics.

Aside from restoring mobility and giving him the ability to work out, Ronald noticed a number of other benefits provided by the iWALK2.0, especially when compared to other commonly-used mobility devices, such as crutches and knee scooters. The iWALK2.0 allowed him to keep his hip flexors active as though he was regularly walking, which is crucial in the speedy recovery of injuries to the lower extremities. It enabled him to maintain strength in his thigh muscles by allowing his leg to function normally and allowed for a more complete range of motion in the hip, both of which contributed to his impressive recovery. When Ronald Forbes was cleared to bear weight on his right leg, he hit the ground running! Recovering in time to compete on the world stage was nearly impossible, but Forbes beat the odds, thanks, in part, to the iWALK2.0. In three short months, Forbes went from almost losing all hope to achieving his dream of competing in the 2016 Olympics. He continues to train and to coach others and he expects that the iWALK2.0 will begin to appear in more doctor’s offices, given the role it played in his own recovery.