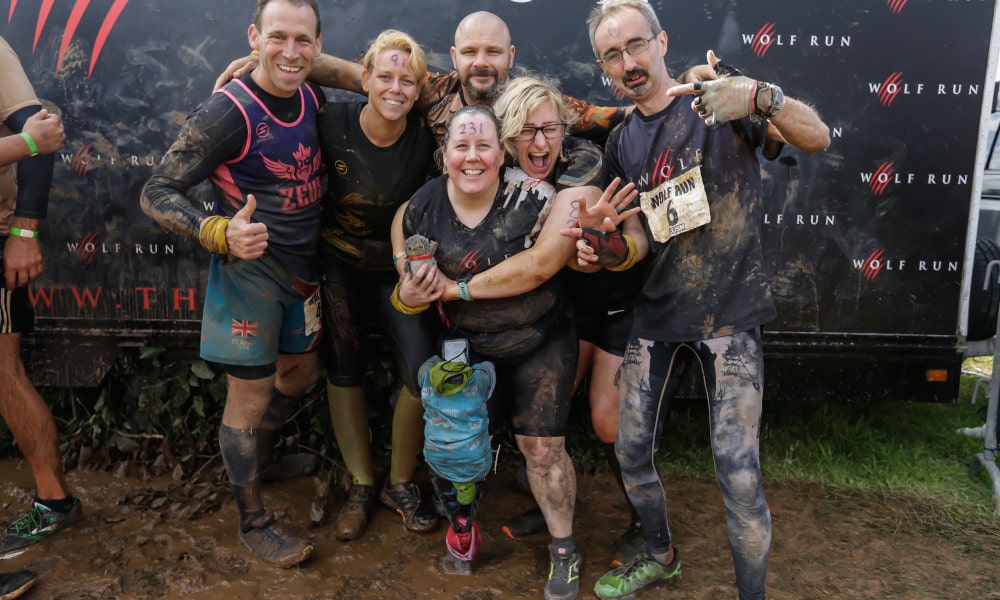 Posted at 02:30h in Stories by Natasha Boydell
0 Likes
Share

A determined woman managed to complete a 10km off-road endurance race despite recovering from a broken ankle, by wearing a hi-tech peg-leg.

Emma Tysoe, 43, from Leamington Spa, was supported by a team of friends and fellow runners when she took part in the Wolf Run event earlier this month, where participants navigate a series of manmade and natural obstacles over a demanding course.

Emma was wearing an iWALK2.0, a hands-free crutch that enables people with lower leg injuries or illnesses to stay mobile. The medically-approved device functions like a hi-tech peg-leg, allowing users to walk freely and reclaim the use of their arms and hands.

Against the odds, Emma made it over the finish line in just under six hours and clocked up her 23rd Wolf Run in five years. She said: “It was an incredible day and my determination to finish combined with the support I received along the way kept me going.”

Adventure-seeker Emma broke her ankle in June when she fell awkwardly while bouldering, a type of rock climbing. She spent a week in hospital awaiting surgery to insert two screws into her foot. When she was sent home to recover under strict instructions not to bear any weight, she became so fearful of crutches that she didn’t move for three weeks.

Emma says: “I tried crutches but I kept falling over and injuring myself. I became too scared to move, so I literally just stayed on the sofa all day, every day, apart from when my husband took me out at weekends in a wheelchair we hired. I got so depressed that I couldn’t do anything – I was in a big, black hole. I had 10 weeks with my leg in a cast ahead of me, followed by several more weeks wearing a special boot, and time has never moved more slowly. I just couldn’t get my positivity back.”

Emma adds: “A friend of mine is an amputee and he’s used the iWALK2.0 before. I decided to buy one and it completely changed my recovery. It was easy to use and I could live my life again. I could move around the house, help my husband in the kitchen and start getting out and about again. It had a real impact on my mental wellbeing.”

Emma, who loves taking part in challenge events, was disappointed that she’d be a no show at an upcoming Wolf Run on 7 September – a quarterly event that she hasn’t missed since 2014. She explains: “If you complete four Wolf Runs in a year, one in each season, you get Alpha Wolf status. This year was going to be my fifth in a row as an Alpha Wolf and I was really upset that I’d lose my status. I was telling my friend that I was going to cancel, and he persuaded me to give it a go. Having something to aim for really kept me going.”

On the day, Emma had some nerves but the sound of people cheering her on kept her motivated. She explains: “I took each obstacle as it came and I loved it, we had such a good laugh. I brought a speaker with me so we could listen to music as I knew it would take a while to get round. It was hard going uphill and navigating ropes but I just kept going.”

Emma adds: “I’m so glad I did it. It was an amazing day and I had an incredible sense of achievement. It was just what I needed to boost myself back up mentally. The iWALK2.0 gave me my freedom back. You’re almost back to normal when you’re wearing it, you’ve got the use of your legs back and you can just get on with and enjoy your life.”

The iWALK2.0 was first invented by a Canadian farmer who broke his foot but still needed to work. He was amazed to find there wasn’t a better alternative to crutches, so he took to his workshop and, less than an hour later, the first ever iWALK was made.

Due to the freedom his new invention represented, he named it the iWALKFree. It has come a long way since then and now it’s a carefully engineered, medically approved, award-winning device used by athletes of all levels around the world.

Brad Hunter, President of iWALKFree, Inc, says: “We love hearing about the amazing things that iWALK2.0 users around the world have achieved. Emma’s story of determination is inspiring and epitomises what the device represents. With crutches you’re disabled but with an iWALK2.0 you’re enabled – and that means that anything is possible. The only limitation is you.”